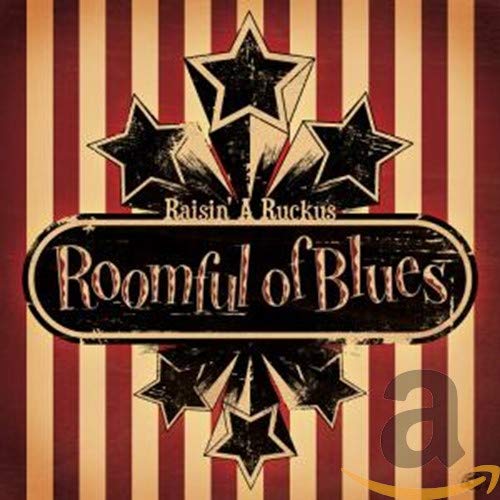 After nearly 40 years of big beats, brassy blues and world-class musicianship, Roomful of Blues is a beloved roots institution as vibrant and vital as the day it was formed. The Roomful brand has a prominence few bands in history can match, and their busy tour schedule and consistently satisfying recordings testify to a refusal to take their fans or their reputation for granted. STANDING ROOM ONLY, the band's most recent release, has scanned over 16,500 units since 2005 and RAISIN' a RUCKUS is next in the line of stellar Roomful of Blues titles.

A tour de force of horn-fired blues. So tight and so right. --Billboard

Roll up the carpets and invite a fun-loving crowd over for a dance party they ll never forget. Roomful of Blues will please them every time. --Living Blues

the great Count Basie called them "the hottest blues band I've ever heard."

Since 1967, the group's deeply rooted blend of swing, rock `n' roll, jump, blues and soul has earned it five Grammy Award nominations and a slew of other accolades, including seven Blues Music Awards (with the nod for Blues Band Of The Year in 2005). The band, with a membership that has continued to change and evolve over the years, has always boasted great musicianship featuring a stellar horn section.

ROOMFUL OF BLUES was born in Westerly, Rhode Island in 1967 when guitarist Duke Robillard and keyboardist Al Copley started a band that played tough, no-holds-barred Chicago blues. They soon began exploring the swinging, jumping blues, Ramp;B and jazz of the 1940s and 1950s, and added a horn section (including Rich Lataille) in 1970. The band's ability to ignite a sedate crowd into a dancing frenzy solidified their reputation as the best "little big band" in New England and expanded their following into New York and Washington. In 1974, they performed with Count Basie, and a few years later legendary songwriter Doc Pomus helped them land their first record deal. In 1977, Roomful of Blues' self-titled debut album on Island Records brought them to the attention of fans and critics from coast to coast.

Over the years there have been at least 46 Roomful of Blues members, each bringing his or her own unique talent and vision to the mix. When founding member Duke Robillard left the band in 1980, equally talented guitarist Ronnie Earl replaced him. Singer Lou Ann Barton joined the band at this time, sharing vocals with Greg Piccolo. By now the band was touring nationally and attracting bigger and bigger crowds. Roomful recorded the critically acclaimed Hot Little Mama for their own Blue Flame label and two successful albums for the Varrick label during the 1980s. In 1994 they released Dance All Night, their first featuring guitarist Chris Vachon (who joined the band in 1990) and harpist/vocalist Sugar Ray Norcia. Radio play was increasing, as was the band's stature. Their 1995 album, the Grammy-nominated "i"Turn It On! Turn It Up!, was a remarkable mix of big band swing and rock `n' roll, bringing the band its greatest radio and sales success to date, and giving them credibility with the rock radio audience.

In addition to their band recordings, Roomful of Blues often backed legendary musicians like Jimmy Witherspoon, Jimmy McCracklin, Roy Brown, Joe Turner, Eddie "Cleanhead" Vinson and Earl King--stars of the 1940s and 1950s blues scene, and the very people who created the music that Roomful still keeps vital and alive. Roomful recorded albums with Turner, Vinson and King during the 1980s, and all three recordings received Grammy nominations. They played with rocker Pat Benatar on her 1991 album True Love, further establishing Roomful of Blues' reputation as one of the best blues bands in the country. The Roomful Horns backed many other artists as well, including Canadian star Colin James on his double platinum album (in Canada), Colin James and the Little Big Band, and Stevie Ray Vaughan on his 1984 Live At Carnegie Hall album on Epic.

We are thrilled to share that Arlo SoHo is teaming up with the Allure Store to provide the ultimate beauty ...
Learn More

When you book directly with Arlo, you’ll receive up to 10% off your stay - just like the cool kids.
Flamenco Mystico

With stays of 3 nights or more, receive up to 15% off.
Learn More

So Fresh, So Clean. In-Room Dispensers.

Service when you want it, how you want.

There’s always something going on at Arlo. You’ll find things that inspire participation, exploration, and a love for city living in the modern traveler’s lifestyle. For work, play, or any purpose, Arlo curates a regular rotation of seasonal event programming as well as special engagements with our friends and partners. Follow along to stay in touch with what’s happening in Manhattan, New York and South Beach, Miami.

30 Stunning Hotel Pools Around the World

Arlo Nomad: Boutique Base for the Savvy Explorer

Catch These NYC Pop Up Restaurants While You Still Can

OOO: The Best Spots to Work When Your Office is The Worst (or Nonexistent)

Arlo is your destination among the best boutique hotels in New York City and Miami Beach. We provide the quintessential lifestyle hotel experience for guests who are looking to immerse themselves in the art, relaxation and culture that makes each city unique. If you want to live like a local while indulging in our luxury amenities and exploring the urban landscape, make Arlo your homebase.

This website uses cookies to improve your experience while you navigate through the website. Out of these, the cookies that are categorized as necessary are stored on your browser as they are essential for the working of basic functionalities of the website. We also use third-party cookies that help us analyze and understand how you use this website. These cookies will be stored in your browser only with your consent. You also have the option to opt-out of these cookies. But opting out of some of these cookies may affect your browsing experience.
Necessary Always Enabled
Necessary cookies are absolutely essential for the website to function properly. These cookies ensure basic functionalities and security features of the website, anonymously.
Functional
Functional cookies help to perform certain functionalities like sharing the content of the website on social media platforms, collect feedbacks, and other third-party features.
Performance
Performance cookies are used to understand and analyze the key performance indexes of the website which helps in delivering a better user experience for the visitors.
Analytics
Analytical cookies are used to understand how visitors interact with the website. These cookies help provide information on metrics the number of visitors, bounce rate, traffic source, etc.
Advertisement
Advertisement cookies are used to provide visitors with relevant ads and marketing campaigns. These cookies track visitors across websites and collect information to provide customized ads.
Others
Other uncategorized cookies are those that are being analyzed and have not been classified into a category as yet.
SAVE & ACCEPT