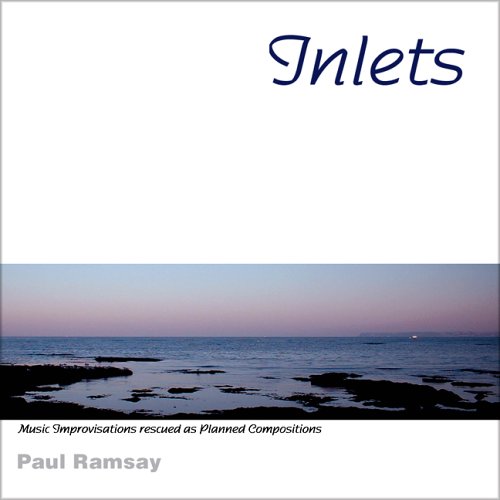 Inlets contains a series of piano-based improvisations exploring the territory between classical and experimental music.

This album began as a collection of piano-based improvisations which were then developed through a series of exotic textures, including orchestral string sounds. The more unusual instrumentation includes a vacuum cleaner (bus lane in fog), a bee (bee narratives) and fireworks (sky touch blue). The twin influences of water and insects were also very important in helping shape the album.

Inlets was recorded during the months of August/September /November. This has led (to my mind) to the music having an autumnal 'feel', evoking aspects of English weather: a celebration of grey skies, rain, misty mornings and dark, evening journeys home (there's also some sunshine and bracing winds). It dwells on small things: small life, small moments, fleeting moods, in a collection of miniatures.

Inlets is something of a hybrid and seems to lie between the territories of experimental and classical music. If you like either, you may wish to give it a listen.

It's not ambient music but you could leave a window open when playing ;-)

Paul Ramsay has been interested in music and especially the album as a cultural unit, from a very early age. After writing and recording music in his teens he went on to train as a recording engineer and briefly, a record-cutting engineer. Feeling that he was the wrong side of the mixing desk, Paul became a member of various bands including 'PGRS' (1 album: 'Photographs of Sound' 1979) and the Southampton-based improvising music quintet 'The Omega Ensemble'.

Additional interest in the visual arts led to a degree in Visual and Performing Arts at Brighton where he composed pieces for dance, developed new strategies for painting and produced video installation work. A determined self-publishist, after graduating Paul issued a series of artist's bookworks on his imprint Alembic Books. In parallel with this he also worked as a researcher for Cognitive Applications where he was introduced to hypertext for the first time. From 1993-6 Paul began to formulate and develop (at Middlesex University) a series of multimedia works using image, text and music, including an indeterminate compositional system entitled Parallel Music or 'PMusic'. Chameleon Lectra was initially conceived purely as an outlet for this work but eventually evolved into something broader. PR currently lectures in Fine Art (Time-Based and Digital) at the University of Plymouth and is a member of the Sonic Arts Network.

I Was Hoping Growing Old Would Take Longer

Underestimate Me. That'll Be Fun

Elect A Clown, Expect A Circus

We Have No Fuel For This Bus (Brexit Bus)

It's all about media control this weekend.

‘When laws don’t apply equally to everyone...’

View all blog posts
At RedMolotov.com we specialise in producing high-quality, original, ethically sourced t-shirts. We try to create designs that both make you laugh and make you think and we pride ourselves in using the best materials we can find.
View all gallery images

Thank you for signing up to the newsletter.