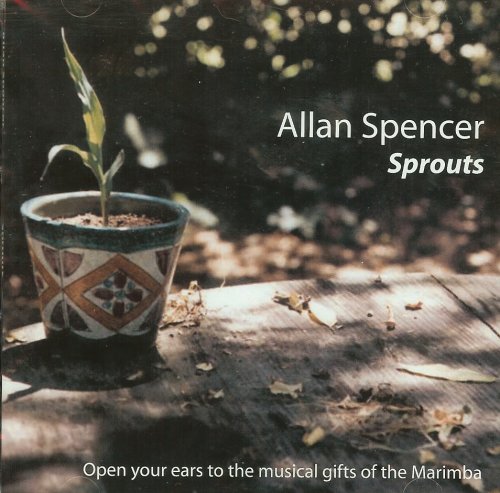 Pathetique Mvt. I Allan Spencer has constructed a fine arrangement of the Sonata Pathetique. The first movement is comparable to a quality expansion of a piano pience for ensemble, successfully preserving the overall feel of the piece while taking advantage of the full range that the marimba quartet has to offer. Underlying the arrangement is an energy level that carries throughout the piece without losing the original phrasing.

Mvt. II Spencer works very hard in this movement to bring sustain to the melody. Obviously difficult for the marimba, Spencer's rolls prove to be very effective, both in the melody line and in ensemble rolls when the melody moves to the tenor voice. Haunting in the initial theme, the arrangement moves in and out of character both subtly and not-so-subtly in development without losing the overall integrity of the feel, then settles beautifully back into the final theme and ending.

Spencer's arrangement of the third movement in the Sonata Pathetique is another stellar example of thematic integrity in ensemble translation, standing both alone and as the Sonata's finale. This arrangement also takes great care in preserving the textures of principal themes and accompaniment. As a result, the marimba ensemble is portrayed as if it actually a period instrument, reminiscent of Evelyn Glennie's work on Fleck's Perpetual Motion.

Closer Walk with Thee Closer Walk with Thee showcases Second Line music from New Orleans. The traditional improvised accompaniment is provided by the unsinkable Viper City Brass Band, with tastefully arranged introduction and coda from Spencer. Featuring solos on saxophone, trombone, tuba, and an impromptu vocal accompaniment from the band, this track presents a rousing trip down Basin Street. As New Orleans style Jazz is primarily improvised, arrangements for this piece are limited to the opening and closing chorales, with the inclusion of a lead sheet for the head. Even the chorales, however, are carefully crafted to accurately reflect the raw underestimated skill of the New Orleans brass band.

The Bumble Boogie is a driving interpretation of Rimsky-Korsakov's dizzying Flight of the Bumblebee. Spencer's adaptation for percussion ensemble is reminiscent of the Disney cartoon short featuring the tune as originally arranged for Freddy Martin and his Big Band. The addition of the faux-surf rock groove on drum set adds a shade of Pipeline or the Ventures version of Wipeout, giving the piece an unyielding energy level and an undeniable sense of fun.

Allan Spencer's Magnetic Rag establishes a new precedent for the vibraphone. Spencer vibraphone does not shirk in its left hand accompaniment, remaining true to the full piano style despite the significant absence of six additional digits. Add to this the Salvation Army style brass accompaniment and the recording presents itself as a quality blend tradition and innovation. --Matthew Cochran

Allan Spencer is a brilliant young performer with many talents. He has this natural and rare ability to create sensational performances. As a skilled marimba player he has given delightful, virtuoso performances that has distinct, beautiful and expressive interpretations totally his own. His amazing flair for style can be experienced in his creative and inspired arrangements for his own marimba ensemble that brought the house down at every performance. He is also an exceptionally gifted communicator who solicits a playful and humorous response from his audiences, and he has a particular talent for communicating with younger audiences.

Allan Spencer is an inventive, enterprising and inspired person with some unique musical gifts that will excite and enhance any given performance, whether it features him as a solo performer, together with his marimba ensemble, or as a part of large-scale symphonic events. I cannot recommend Allan Spencer to you enough. --Henrik Jul Hansen, Music Director of the Merced Symphony Orchestra

Sprouts, Allan Spencer s first CD, is an excellent collection of marimba and percussion works designed to showcase unique arrangements of several classic works, from classical to jazz. Allan is a crafty musician, calling upon multiple resources to produce a highly-effective and interesting recording. If you do not consider yourself a percussion aficionado, step-out and take a chance on this CD, as it is a good way into a musical world that few have a chance to experience. --Dr. Michael Caldwell - Professor of Music at California State University Fresno