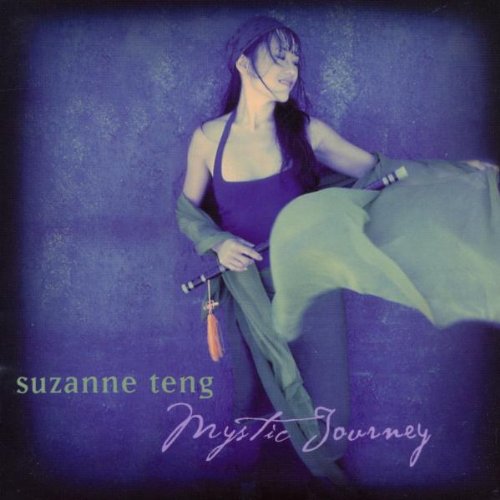 Travel the world and beyond! Suzanne is joined by 17 master musicians on this recording of original music that features flutes, strings and percussion instruments from around the world. This uniquely beautiful instrumental music blends the east with the. Autumn Light.2004

"Lifts the listener to a place where beauty, ecstasy and tranquility reside. Full and rich. Delivers the goods." -- - Whole Life Times

"Music for the soul. This is a lovely album. Its music will stay with me for a lifetime." -- - Al Martinez, Los Angeles Times

"Suzanne Teng is a student of the flute, playing variations on this instrument from around the world on her impressive solo debut. Sensual and serene, Teng orchestrates a global percussion landscape with Gilbert Levy, sending improvisations across a slow dance on "Topanga Dreams," creating a Middle Eastern tango on "Katyia's Dance," and bringing out a ritual dance on "China Lily." On "Aduman," Teng is joined by African kora player Prince Diabate in a vibrant narrative of cross-picked melodies. Because she is often inspired by dance, one can hear her rhythms and melodies flowing with the form of bodies in motion. And when exhaustion sets in, Teng envelopes the listener in a meditative space of "Clouds Across the Darkness," with a multi-tracked bass flute blowing across wind chimes and a Tibetan singing bowl. "Mystic Journey" is an impressive debut from a former member of the Angels of Venice." -- "i"Billboard Magazine

Sensual and Serene....Mystic Journey is an impressive solo debut." -- "i"- Billboard Magazine

Suzanne Teng is a flutist, dancer, percussionist, composer, teacher and recording artist from Berkeley, California. She has a masters degree in music from Boston Universitys School for the Arts and has studied with some of the finest flute teachers in the world. She is an award winning classical musician who, after traveling adventures across the globe, furthered her graduate studies at UCLAs Department of Ethnomusicology where she completed the coursework for the Ph.D., focusing on Music and Healing.

Known for creating music that is spiritual and healing in nature, she has composed music for yoga and acupuncture videos and performs in concerts, festivals, and dance/movement/yoga events across the country as a soloist and with her world music band Mystic Journey. She was a featured performer at His Holiness the Dalai Lamas World Festival of Sacred Music 99 and has been featured performing her flute meditations at numerous major events with spiritual leaders and writers such as Thich Nhat Hanh, Marianne Williamson, Mathew Fox and David Whyte as well as for corporate heads in the US and Mexico.

She has worked with a wide variety of artists and ensembles including the Boston Philharmonic, Los Angeles Pops Orchestra, Tito Puente, Kenny Loggins, Babatundi Olatunji, Airto and Flora Purim, Alessandra Belloni and The Dramatics.

Suzanne has recorded for Polygram, Warner Brothers, Windham Hill, BMG, Shanachi, Scottie Brothers, and numerous independent labels. Film, Television and commercial credits include "Pepsi," "Jonnie Walker," "California Tan," "Murder She Wrote," "Big Bully" (Tom Arnold), "Separate Lives" (Jim Belushi, Linda Hamilton), and foreign film scores and commercials for India, Germany and Mexico. Her flute playing is featured on an Environmental PSA (music by Hans Zimmer) which will be seen by over one billion people worldwide. She has appeared on national television and radio and has been featured on Public Radio International three times.

She is an endorsed artist for Yamaha and AKG and is a popular teacher, having taught flute, percussion and world music to many hundreds of students. She has practiced yoga for 13 years, loves traveling, gardening and hiking and has summitted 19,000 foot peaks in the Himalayas.

Gilbert Levy was born and raised in New Orleans, Louisiana. With an early love for drums, he purchased his first drum set with the money he received for his Bar Mitzvah. Since there were already 40 drummers in his school program, Gilbert chose to study the trumpet and tuba in order to play in the high school band. His passion for drumming won out though, and he was soon performing professionally as a drum set player in R amp; B bands in clubs on Bourbon Street and with jazz greats such as Wynton Marsalis. Gilbert moved to Los Angeles in his 20s to further his musical career and fell into the world of pop music. After playing in numerous bands and working on several major label recording projects, he grew tired of the Los Angeles music scene and took a sabbatical from music. He then discovered world music after hearing tabla virtuoso Trilok Gurtu and began intensive studies on the tabla with Pandit Ravi Bellare. Gilbert has since developed an ability to play just about any drum! he picks up and is a specialist on the Indian devotional drums, the khol and pekawaj, on which he is the primary accompanying instrument for numerous kirtan chanters (devotional Sanskrit call-and-response chanting). His unique drum kit includes drums from Africa and the Middle East blended with tom tom and cymbals. His musical style blends traditional rhythms with funk and Ramp;B and his ability to create unique drum patterns keeps him in demand as a performer and recording artist

Heavy rains forecast in Kerala for next few days; yellow alert in 12 districts

Unwilling to give in to cerebral palsy, Arya to study at IISER

Two canines retire from Customs squad after 9 year of service

Back to school finally