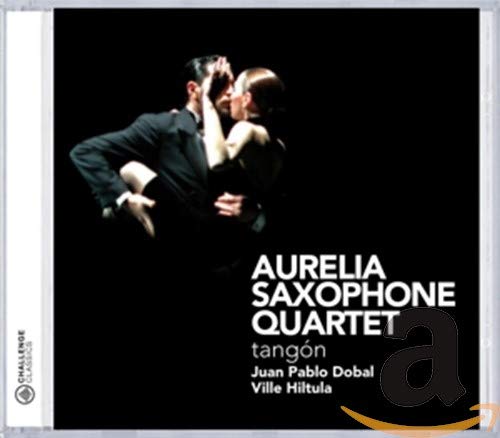 Recorded live at the BethaniÃ«nklooster in Amsterdam on September 2006. The world-famous Aurelia Saxophone Quartet's first Piazzolla tango CD was a smash hit some ten years ago. The addition of a pianist and bandeonist adds extra authentic tango flavor to the saxophone sound. Features classic Piazzolla works combined with seven world premiere recordings! The quartet has made radio recordings at home and abroad, and regularly performs on TV. They play most music without a score, in order to promote optional concentration among the audience and themselves.

In 1994 the Aurelia Saxophone Quartet recorded the CD "Contrasaxeando / Tango Nuevo" with bandoneon player Gustavo Toker and pianist Juan Pablo Dobal. An extensive concert tour followed, with bandoneonist Carel Kraayenhof eventually replacing Toker. The tour and the CD were devoted to the music of Astor Piazzolla and both were extremely successful. Ten years on, the time was ripe for an encore.
Together with Hiltula (Tobal being back in Argentina) and Dobal, the quartet goes in search of the post-Piazzolla tango, while still paying tribute to the great master. We are treated to a rendition of Piazzolla's bandoneon solo Toccata Rea from his opera 'Maria de Buenos Aires', Milonga Loca ('crazy Milonga') and Mumuki, and the sextet also plays his La Muerte del Angel as an encore.

The hot Italian summer of 1982; four young Dutch saxophonists rehearsing in Via Aurelia in Rome; the beginning of a sensational, pioneering chamber-music ensemble: the Aurelia Saxophone Quartet. Then came:Concerts throughout the world from Suntory Hall in Tokyo to the Gewandhaus in Leipzig - not to mention the little church in Marken-Binnen in the Dutch province of Noord-Holland and a municipal centre in Oristano, Sardinia which smelt of beer.

Radio and television performances from Washington, DC to Tirana, Albania. Broadcasts on the Emmeloord Patients' Radio Network to TV Wolgograd.

Currently nine CDs to the group's name, one of which won an Edison and international praise, setting a new standard for saxophone quartets the world over.

Over seventy world premieres of works by ter Veldhuis, Goldstein, Keuris, Andriessen and many others. The group gives compositions the chance to grow and plays pieces frequently so that they are heard often.

Astounding and ambitious arrangements. String quartets by Ravel, Debussy and Shostakovich. The Art of Fugue, the sonatas of Domenico Scarlatti. Pushing boundaries for our one great love: the saxophone quartet.

Why we must invest more in the farms of the future

Celebrating 10 years of impact from the Global Shapers Community

What is the metaverse? And why should we care?

In Episode 5 of 10 Years of Emerging Tech, Sang Yup Lee, Distinguished Professor and Vice President for Research at the Korea Advanced Institute of Science and Technology shares his insights on microbes that are specially engineered to produce useful chemicals and materials. The technology behind this greener approach to chemical synthesis – called systems metabolic engineering – made it onto the 2016 list of Top 10 Emerging Technologies.

What Is COP? And Will It Save The Planet?

Baobab And Moringa Are Transforming Women’s Lives In Burkina Faso

Paris Aims To Be A 100% Cyclable City Within 4 Years

The World Economic Forum is the International Organization for Public-Private Cooperation.

Namibia considers its contribution to the fight against climate change a ‘strategic bet’ and has pledged to reduce its emissions by 91% over the next five years.

Why we must invest more in the farms of the future

Lignocellulose: how nature's wonder material could help the energy transition

COP26: how can we curb emissions before it’s too late?

57 organizations release open letter for EU to act on ESG

Emerging technology: 10 years of top tech trends and how they've changed the world

3dRose Blue Sailing Chart with Nautical Anchor, Helm, for Your.

How we create ImpactOur Mini EventsBecome a Forum Partner

A weekly update of what’s on the Global Agenda

Explore the forces driving change across more than 250 topics, curated by global experts, and identify the most relevant publications, videos, data, and much more

UpLink is the open innovation platform of the World Economic Forum, seeking to identify and scale the most promising solutions for global pressing issues.

How does your personality type affect your income?

Hurricanes are having an increasing impact on coastal communities. This is how policy-makers can respond

How can we generate more good jobs in developing countries?

Lessons from Singapore on promoting diversity and inclusion at work

Why US firms need to look for the 'hidden' workforce

How to Save the Planet

Why the COVID-19 recovery needs to focus on green investments

90 manufacturing sites are scaling innovations on our learning network